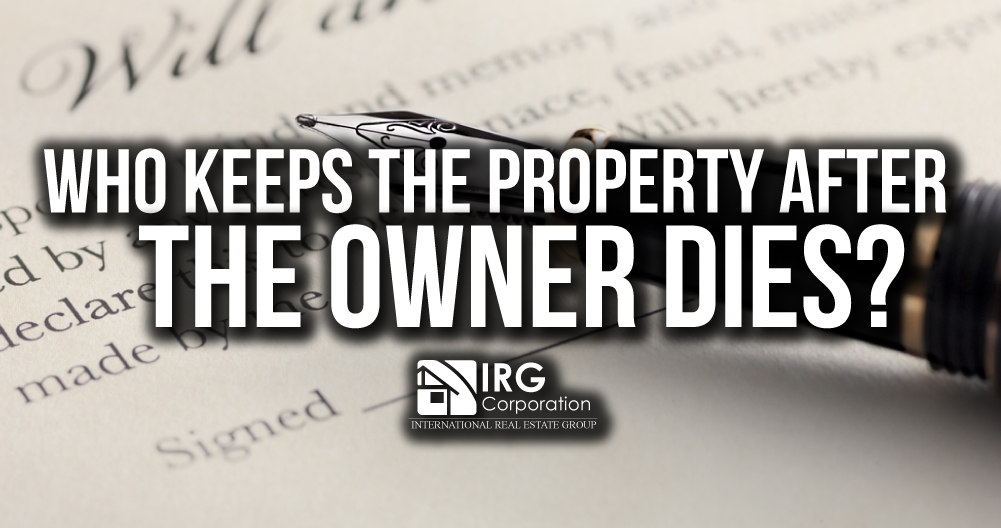 Who keeps the property after the Owner dies? This is a question sadly many of people have asked themselves over the years and it’s a question whose answer will depend on many factors such as how was the house titled, it there was a will or if there was a mortgage, and with each one of them, there are different options you can follow though to make the best choice and do what’s best for your own interests as well as the interests of the deceased!

Firstly, if there is a will there is a way, basically if the will states who will end up with the real estate it’s pretty settled what’s going to happen, and it will be up to the person receiving it to decide what’s after. When there’s a will, it’s a lot easier to make up what to do, but the thing is that sometimes there’s not and then you will have to deal with a few surprises that might or might not be a hassle to deal with during this hard time.

One thing you will need and have to do, whether or not there is a will is get a proof of transfer of ownership, and here’s where it can get a bit tricky and messy, first of all, there’s something you need to know before you try to get it, know how is your house titled, if it’s titled sole ownership, aka, the deceased is the only one who appears at any level of ownership on the house, joint ownership, which means there are 2 or more people who have the ownership of the house, and this one divided in two, joint ownership with rights of survivorship, usually done by marriage and joint ownership with no rights of survivorship, usually had by tenants in common; and lastly titled by contract which has a beneficiary named to receive the property after the owner dies, and usually has a payable in death, transferable in death or in trust of beneficiary designated, which will then help out the beneficiary understand what it is that has to be done.

Usually with this kind of situations there is a time line and a certain process that must be done, in some cases it’s a probation which occurs only with probate assets, meaning those who don’t have an owned by survivorship title, and it’s a process in which the beneficiary will have to go to court to be able to access those assets, or non-probate assets in which immediately after the death of the owner, the beneficiaries will be able to take over the assets and control them.

After you have received this property is up to you what you get to do with it, if you wish to sell it, we can help you out in the fastest way possible! Let us know if you’d like more information like this one and if you’ve found it helpful to determine who keeps the real estate after the owner dies!

Remember this Thursday we have another IRGChat on our Twitter account, hope to see you there, at 2pm (EST)!