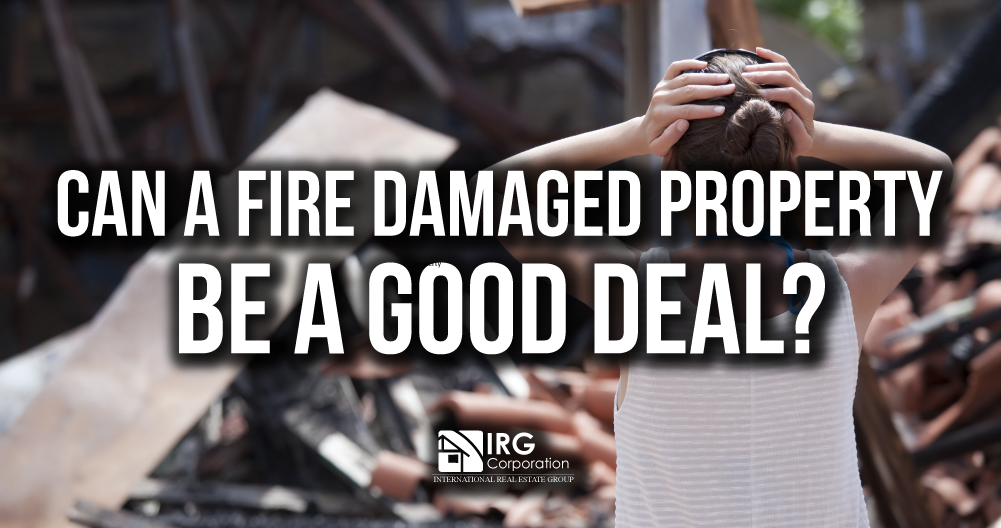 Since fix and flipping has been back in the market as a prominent option for Real Estate investment, there are a few kinds of deals that some people might stir away from, and often those are the fire damaged ones! So, this begs the question, can a fire damaged property be a good deal? Let’s dive into it!

Firstly, there’s a lot more research and inspecting needing to be done in this kind of deals, but most importantly, it does scare away a ton of buyers who really just want the usual easy fixes like changing the lighting, painting the house or simply fixing a hole in the wall, but with a fire damaged property the rehabbing can be a bit more throughout and a tad more expensive, what this means is, your market will be significantly reduced and the price of this deal might be lower than any other rehab deal making it what other might call a bargain! But what a good deal, you might say! The truth is, the damages a fire can cause need to be deeply checked before you can decide if a fire damaged property can be a good deal!

The most important thing you need to keep in mind is inspections on everything! The main reason why this is so important is because while you might see just a bit of damage, there might be some internal damage that might pop up while you’re doing the fixing, which can lead to more expenses than you originally thought! So, inspect every aspect, know exactly what the fire has done and it doesn’t matter how long you take on this, it’s better to know exactly what you’re working with to make a good deal and negotiate till the price you pay can be returned after you’re done with it!

Something that might put you off from this kind of deals is the smell! You might need to clear out the house of everything the fire touched to get rid of it! Also, hire a structural engineer to know if the structure has been compromised during and after the fire, to see if the pipes have melted or there are some weird stuff going on with it by the force of the water when trying to put it off! This is key and will help you crunch the numbers to determine if a fire damaged property is indeed a good deal!

Here’s the thing, it can be a super discounted property, and if your numbers make sense in how much you will be paying and then getting in return, go with it! It’s a good investment in the long run, because once it’s fixed you will be able to ask full price on this deal, and sometimes that’s double of what you paid for! This changes from deal to deal, but if you have done your inspections right and have everything ready for this kind of investments, then yes! A fire damaged property CAN and IS  a good investment!

Remember this Thursday we have another IRGChat on our Twitter account, it’s about the Best Places to Buy on South Florida, hope to see you there, at 2pm (EST)!